This post is the first in a (non-consecutive) series on art inspired by an exhibition at theSanta Barbara Museum of Art (SBMA) and by my Italian teacher and SBMA docent, Gabriella Schooley.  Entitled “Botticelli, Titian, and Beyond: Masterpieces of Italian Painting from Glasgow Museums,” this exhibition explores Italian painting over six centuries from late Medieval works of the 14th century to neo-classical paintings of the 19th.  This first post focuses on the Renaissance and the defining stylistic elements beginning in the early 1400s.  It is based on “The History of Art from Gothic to Baroque” by Francesco Morante.  This post will also appear on the web site of the Italian Cultural Heritage Foundation Santa Barbara, www.italianheritagesb.org.  Gabriella is the President of this organization.  Barbara Hill-Vollero

From the beginning of the 15th century, art that began in Florence and then spread first through Italy and then throughout Europe, later became known not as “Italian” art but as “Renaissance” art.  The term was first used by a German historian, Jacob Burckhardt in the 1800s.  With this term, he wished to emphasize how, from that time on, art returned to an esthetic vision similar to the classical age.  In effect, art in the 1400s was not born but was “reborn” in a way that projected ideas similar to those created in ancient Greece and Rome.

This new era was not purely and exclusively artistic, but was “born” by a way of thinking that was broader and more profound:  it was the idea that man was at the center of the world and was endowed, not only of free will, but also of an intelligence that allowed him to understand and decipher the world around him.  In effect, man was liberated from the mystical medieval world view, from which the only possible awareness came from the word of God.  From now on, the problem of consciousness for man became an even bigger problem:  how to sharpen one’s methods of observation with the ability to analyze and deduce.

Generally speaking, Renaissance art was marked by four very important discoveries and changes, which will be discussed below.  The determining element was probably the use of drawing.  Another, from a stylistic point of view, was the birth of perspective.  But the Renaissance was also a rediscovery of classical antiquity and, from a social point of view, a profound evolution in the figure of the artist.

Drawing as a Planning Instrument

As strange as this may seem, it is only at the dawn of the Renaissance that artists really learn to draw—that is, to use design as a tool to create anything—images, objects, space.  But it was not simply a technique of representation; it was an instrument of thought.  It was a planning tool that we can define as “visualization”:  it allows the artist to see the final result before making the actual work.  Today, we have other even more powerful planning tools, such as the computer, that allow us to see a work as if it already existed. 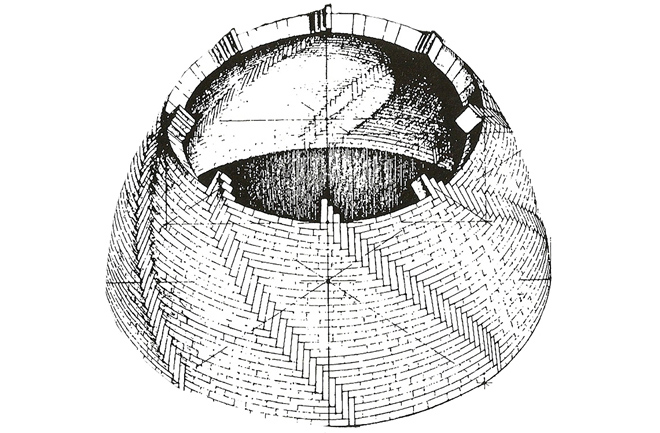 Filippo Brunelleschi’s drawing of the Dome of the Florence Cathedral

In the span of a century, as we look at the designs of Leonardo da Vinci, we realize how drawing is by now the principal tool of the artist.  The Renaissance artist can project works of art, architecture, military works, civil and mechanical engineering, and so on.  And from this comes the great eclecticism of renaissance artists:  never before this period did the same person work in so many different fields, and with such extraordinary results. The discovery of drawing also brought an unforeseen consequence: it became possible for the artist to separate inspiration from execution.  From architecture, to sculpture and painting, the master could limit himself to designing or planning the work.  The material execution could then be entrusted to helpers and collaborators.

Medieval art had simplified representation both in painting and sculpture, ignoring spatial effects.  Figures, in schematic poses and images, were arrayed on a single vertical plane.  This brought an unnatural feeling to the representation as the images did not resemble the images that our eyes took in from surrounding reality.  Naturalism, in painting, could be defined as a reproduction that brings us nearer to those our senses see.  While there are very precise optical laws that regulate our vision, practically speaking, the painter perceives a 3-dimensional reality and translates it into a 2-dimensional representation using a logical system called “perspective.”

Among the various rules at the foundation of perspective, we will cite two:

The first applications of perspective occurred in Florence, in the third decade of the 15th century, in the work of Masaccio in painting and Donatello in sculpture.  But the true inventor of perspective was Filippo Brunelleschi, a painter and an architect.  In fact, a very close relationship exists between architecture and perspective.  In nature we never find straight lines, parallel lines, right angles, squares, circles, and other similar geographic shapes.  These are elements we find in architecture constructed by man.

We are witnesses in the 1400s, in fact, at a very close union between painting and architecture.  To realize spatial depth using perspective, the early renaissance painters always use architecture.  Perspective elevated geometric clarity to a new canon of beauty.

The Return to Antiquity

In medieval times, the vision of art, based fundamentally on religion, completely excluded the concept of beauty.  Art had essentially a didactic goal: to teach the stories of the Christian religion.  Beauty was not important; in fact it often was considered dangerous.  Because beauty speaks to the senses, it could induce sin. Sandro Botticelli, The Birth of Venus

The study of neo-platonism, which was born in the 3rd century, was important for its reflections on beauty.  And it contributed to bringing back, in the course of the 1400s, the theme of beauty to a new era.  In this way, therefore, the Renaissance rediscovers antiquity.  It brings back the sense of beauty, the harmony of proportion, the enjoyment of the perfect form.  As in classical art, renaissance art wants to attain a more perfect naturalism: it strives for a representation of reality that, in its perfection, is exactly aware of that which it is representing.  The art also contributed to create the new man of the Renaissance—a man who investigates with every available tool the world that surrounds him in order to better understand it.

The New Role of the Artist

Throughout Medieval times, the artist was considered an artisan, that is, a person whose ability was above all, manual.  According to a distinction that arose in ancient times, the arts were divided into “liberal” and “mechanical.”  The first were those that focused on thoughts and words, the second implied instead a manipulation of materials.  The figurative arts were considered among the mechanical arts.  Painters and sculptors could be illiterate, and often were, so that any thought activity was not asked of them.  They only had to possess the technical ability to execute what the buyers asked of them.

The situation evolved over time.  Already in the 1300s, with Giotto, for example, we witness an extraordinary growth in the social regard of the artist.   But it is in the Renaissance that the figure of the artist achieves a great leap:  from this time on, the artist claims for himself the role of the intellectual.

Even the place of the artist changes:  it is no longer that of the workshop, but that of the court.  Many artists were directly employed by the men who governed the small states, in which the peninsula was divided in that century.  To the figure of the prince-patron was the corollary of that of the artist as courtesan.  And in the court of the prince, the artist came into contact with all the major intellectual figures of the time—poets, writers, philosophers, mathematicians, etc.

The Dawn of the Renaissance

The birthplace of Renaissance art is Florence, and the three protagonists were among the greatest artists of all times:  Brunelleschi, Donatello and Masaccio.  At the end of the 1300s, Florence was a rich city that was slowly recovering from an epidemic of the middle of that century.  The richness of Florence came mostly from families (Medici, Strozi, Pitti, and many others) who were dedicated to banking activities.  This allowed the city to invest in works of art in a much more extensive way than other Italian cities.

In the first half of the 1400s, more impressive were the laws of perspective, not so much the rules of rationality that were at the base of it.  After the teaching of the three masters, other artists still preferred to follow a middle road.  In a late Gothic style, they insert the novelty of perspective, often only as a new stylistic element of the times.  This is true of artists such as Paolo Uccello, il Beato Angelico, and Filippo Lippi.  Only after the middle of the 1400s did the new Renaissance style find proponents more attentive to the innovation at the base of this style.