as promised, I am delighted to send you more information  about the two operas in particular and of the event in general.

While most critics agreed Gianni Schicchi had the most potential of the two, Suor Angelica, with its all female cast, received negative reviews and was soon dropped from the set and forgotten.

In recent times, however, there has been a new reappraisal of Suor Angelica and a recognition that it is musically equal to Puccini’s other operas. Additionally, the negative reviews of the past have been due to other issues such as sexism and a misinterpretation of the composer’s staging intentions, and not because of a lack of musical beauty.  Puccini’s intentions, some critics now say, were to place the action of the opera in a much harsher environment typical of a 17th century convent for nonconforming girls, rather than in a more modern and softer environment, in order to highlight the dramatic situation of the young Florentine aristocrat.

Here is now a short synopsis of the stories of the two operas.

Suor Angelica is a dramatic tale of loss and repentance.  After bearing an illegitimate 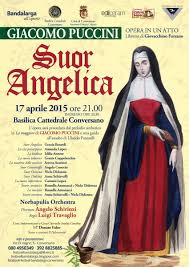 child in late-17th century Italy, Angelica is sent to a convent by her family. Seven years later, Sister Angelica receives the news that her child has died. Devastated, she sings the lament, “Senza mamma” (“Without mamma”), mixes poison, and resolves to kill herself. After drinking the poison, Sister Angelica realizes that her suicide is a mortal sin, and therefore she will not go to heaven. As she dies, Sister Angelica prays for forgiveness, and in her last moments, has a vision of the Virgin Mary bringing her lost child to her.

In this hysterical farce, Gianni Schicchi opens on the Donati family mourning the passing of their patriarch, Buoso. Their tears, however, are not real until they discover that Buoso has left his immense fortune to a monastery. Frantic and greedy, they call upon Gianni Schicchi, a self-made lower class man, to help them re-write the will. In a series of hilarious scenes, secret deals, and a ridiculous plan, the family succeeds in tricking the doctor and the notary into thinking that Schicchi is Buoso. However, when the time comes, Schicchi leaves every great part of the fortune to himself! Schicchi reminds the audience that his fraud has not only made him rich and humbled the family, but brought together two young lovers; his daughter, Lauretta, and Rinuccio.

And now the practical details of the event.

MATINEE AT THE OPERA

2:30pm for Suor Angelica/Gianni Schicchi at the Granada Theater

To make a reservation, please click on this LINK  for a downloadable, printable form and follow directions.

This entry was posted in Circolo Italiano. Bookmark the permalink.