A program of the Italian Cultural Heritage Foundation of S.B., a 501 C(3) organization

It is with great pleasure that we announce this year’s Cinema Italiano Contemporaneo’s movie line-up!

The three movies we have chosen are not only well done and entertaining but, equally as important, they portray an interesting theme.  How do people survive adversity, in this particular case in Italian society?

We start by presenting how a group of young people in the 13th century survives the black plague in Florence (first movie); We then go on to a movie on how to survive the very difficult job market in present-day Italy in a “creative” way; Finally we will show the tale of an unusual way to survive and re-enter society after a wrong murder accusation has sent a person to jail for 30 years.

We are sure you will enjoy and be intrigued (in more ways than one) by every one of them for totally different reasons….and, yes, you will laugh and be moved!

And here they are: 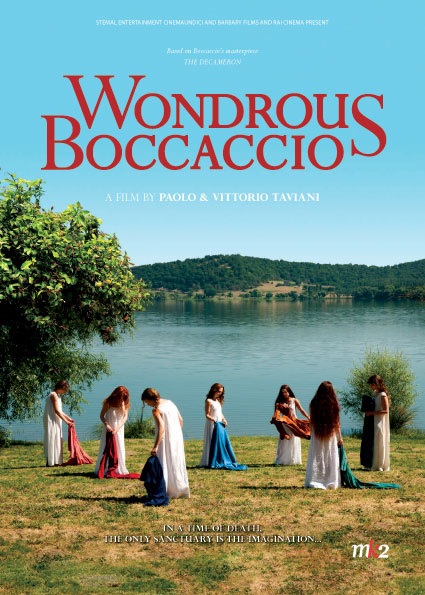 Synopsis: Florence, Thirteenth Century. The “Black Death” is spreading. Ten young people (three boys and seven girls) decide to escape and to seek shelter in the countryside, away from the horrible consequences of the plague. In order to spend time, each person tells a particular story, but no matter how different their stories may be, they all have one aspect in common: love. A love that will help the characters cope with the numerous uncertainties of a very arduous age.

Synopsis: A chemist, university researcher barely earning a living, is fired. After meeting a student of his, he learns the street value of drugs. He then designs a “non-illegal” drug and starts selling it with a group of friends, PhD holders working menial jobs and underpaid. Things get complicated when they earn too much money, get noticed, and their business is frowned-upon by a big drug dealer named “Murena”…

Synopsis: Veteran ambulance chaser Oscar gets ‘bitten’ by a dog and decides to make some cash by suing its owner. However, this turns out to be Armando, a penniless man just released from jail after 30 years for a crime he didn’t commit, shunned by everyone except his dog. Oscar sees the potential of getting millions in compensation from the state, and the two fifty-somethings team up in search of clues along with the help of a friendly Barista who owns the neighborhood café.

Doors open to general public at 7:15: Seating limited to 140 seats.

This entry was posted in Cinema. Bookmark the permalink.